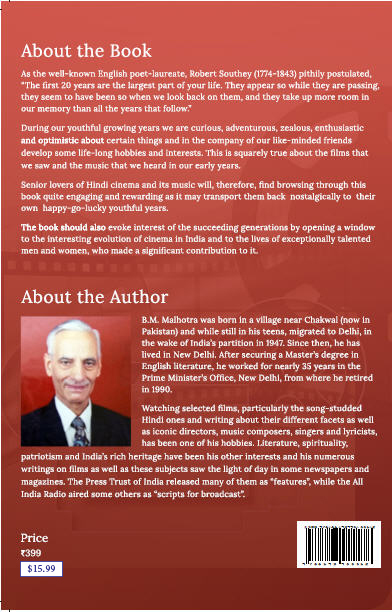 Hindi Cinema and Its Unforgettable Icons

This book contains a collection of 37 articles about Hindi Cinema, particularly some memorable filmmakers, directors, actors, music composers, lyricists, singers and others of the Golden Era who have made significant contributions to the steady growth and wide-spread appeal of this industry.

The book is a handy resource point for movie lovers of the younger generation who would like to know about the maestros of our golden past without delving into detailed biographies.

The collection of articles includes biographical sketches of filmmakers such as Dadasaheb Phalke, Ardeshir Irani, Raj Kapoor; singer-actors such as KL Saigal, Suraiya; music directors such as Anil Biswas, Madan Mohan; lyricists such as Sahir Ludhianvi, Kaifi Azmi; actors such as Madhubala, Nutan; comedians such as Johnny Walker, Charlie; singers such as Lata Mangeshkar, Mohammad Rafi and also some evergreen characters that lit up the screen such as Kabuliwala, Devdas and Tansen.

The essays are in crisp and concise form that the young movie enthusiast, curious about vintage films and the music would love to read and relish.

The content is based on the author’s observation, study and memory, besides of course research in terms of the background, dates and other factual information.

The collection has, therefore, a certain historical significance as some of the facts may not be known to today’s youth. It also has a distinct nostalgic flavour for the older generation of film lovers, who can recapture their past experiences through the flashbacks offered.

The author’s knowledge of Urdu and Persian helped him better understand the meanings and appreciate the nuances of certain film dialogues and songs. Most of the articles in this collection were published in the magazine, INDIA PERSPECTIVES and the specific months of their publication have been indicated to help the reader keep the time factor in mind. New Delhi
About the Author/Editor